2013 is coming to a close. It was quite possibly the most successful year in Davis Track and Field and Cross Country history. The program ended the year with 4 region championships, 3 state championships, 1 national championship, two teams qualifying for NXN, and a podium finish at the Nike Cross Nationals (NXN).

Indoor Track - Although it's not an official state championship, both our boys and girls indoor track TEAMs won the Utah State Indoor Championships at the Olympic Oval in February. The girls scored 96 points at the indoor meet (2nd place was Ogden with 26), and the boys scored 75 (2nd place was Woods Cross with 47). We carried that momentum into the Simplot Games where we brought home more medals than Davis has ever won in one year. We also set 4 new school records at the Simplot Games: Seth Fortin in the 60m dash (6.92), Shea Martinez in the 800m (2:09), the girls 4 x 400 team of Shea, Taylor, Ellie, and Christine (3:57.93 - also a Utah State Indoor Record), and the boys 4 x 400 team of Seth Fortin, Trevor Leavitt, Jackson Sagers, and Seth Thompson (3:27). It was also the largest group we have ever had at Simplot.

Indoor track didn't end with Simplot. We were fortunate enough to bring a small group out to the New Balance Indoor Nationals at The Armory in New York City. In New York, Preston Johnson finished 7th in the 5000m (15:06) and the boys 4 x 1 mile team finished 10th, averaging 4:25 per runner. We also put together our fastest girls 4 x 800m team ever with Ellie Child, Joanna Boyd, Taylor Cox, and Shea Martinez. Those 4 girls ran 8:56.57 - the fastest ever for a Utah team and the 3rd fastest in U.S. history - and their effort earned them a National Championship. They worked so hard for that moment and then ran with purpose, determination, and unity. I still get the chills when I watch the race: 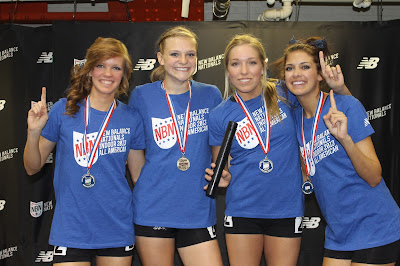 Outdoor Track - was just as exciting. Both the boys and the girls had perfect seasons - both teams were Super Meet champions, District champions, BYU Invite champions, Region champions, and State champions. It was the 3rd straight state title for both the boys and the girls - something that has only been done by one other team in 5A history. Some of the highlights of the year include: Shea's double victory at Arcadia (mile and 800m); Trevor Leavitt's school record 47.96 400m school record at the BYU Invite; Seth Fortin's 10.80 100m dash school record at the Davis Invitational; and an absolutely unbelievable state championship where both the girls and the boys dominated the field in our "double threepeat". The girls won by 90 points and the boys won by 38. The state meet itself included some huge highlights for us: Bailey Carling won the 100 and the 200; Shea Martinez won the 800 and 1600 for the 3rd year in a row (including a school and state record 2:08 800m); the girls won all 3 relays; Christine Van Brocklin had a very inspiring 300m hurdle victory; Jessica Richardson won in the discus; Kendall Sargent had a huge PR throw for 2nd place in the javelin; our girl distance runners scored 58 points in 3 events; the boys won the 4 x 100m relay for the first time in over 10 years; and the boys won the entire meet with only 1 individual title (Marcus Daley in the long jump).

With the end of the track season, we were sad to have 3 amazing coaches who are moving on to new things in their lives. Jamie West was at Davis for 6 years - first as the girls head coach and then as the hurdle coach. She is a great coach and an even better person. Jamie has moved up to Morgan with her husband, Wyatt, who is working as the town doctor. Lauren helped at Davis for 4 years with our sprinters. She brought toughness and energy to our program and we are really going to miss her. Lauren got married and is moving to Texas with her husband, Mike. Alayna has also helped at Davis with our throwers for 4 years. She is now working full time, but might be back now and then to help out (we hope). It will not be the same without these three awesome coaches.

Cross Country - The summer training set us up for another strong cross country season. The boys ran a total of 26,700 miles and the girls finished the 12 week summer with 14,400 - both were TEAM records. The 2012 season was going to be very hard to top after we had qualified both teams for the Nike Nationals. There were also a lot of question marks with this year's team because we had graduated so many seniors in the spring. As the season began, it was evident that with some patience and experience we could accomplish some great things. By the time we raced at Bob Firman, the girls were showing they could be the best Davis team yet. With some very good seniors (Taylor, Kenzie, Hannah, Ashley, Sierra, Aimee, and Chelsey) and the addition of a stellar freshman group (Aubrey, Ally, Miah, and Grace) we found ourselves set up for a run at the state team time record and a return trip to NXN. In fact, after setting the Bob Firman team time course record, we were sitting at the top of the dyestat national rankings. We held our #1 U.S. Ranking for 6 weeks - through the state meet and almost up until the Nike Regionals. At state, the girls ran a team time of 92:27 - breaking Bingham's 14 year record by 83 seconds. We placed 5 girls in the top 10 and were led by freshman Aubrey Argyle (2nd place). Aubrey ran a Davis course record of 18:09.

The boys season was equally exciting. We had our ups and downs, especially some very close losses (2nd by 1 point at Murray, 6th by 2 points at Bob Firman, 3rd at Westlake by 8 points), but we kept our heads up and showed a lot of patience and determination. The boys won their 19th straight region title, and finished 3rd place at the state meet. The boys could have easily been discouraged after the state meet, but they stayed positive and kept working toward Nike Regionals. With very slim chances of finishing top 2 and qualifying, we still went into the race with a goal of making it to Portland. All the patience and hard work paid off in Arizona as the boys ran their best race of the year and qualified to go back to NXN for the 4th year in a row. We were led all season by our captain Skylar Williams. It was a season of unity and faith. Our young, inexperienced TEAM found a way to put it together when it mattered most.

For the 2nd year in a row, both the boys and the girls qualified for the Nike Nationals. One of the things I love the most about the trip is that it inspires the runners to work hard to be their best. It also gives them some valuable experience against the best runners (and teams) in the country. The girls were hoping for a podium finish - and they didn't disappoint. We finished in 3rd place behind Wayzata (MN) and Manlius (NY). Taylor Cox was our top finisher in 39th place. The boys also ran very strong to finish 17th and were led once again by Skylar Williams. With only 2 seniors on the boys side, we are hoping to be back and fighting for a top spot in 2014.

2013 was definitely a year to remember. A huge thanks goes out to everyone who was a part of it. As we look forward to 2014, I am excited to see what we can accomplish and what surprises are in store. Keep dreaming. Keep believing. Keep working. Keep fighting.